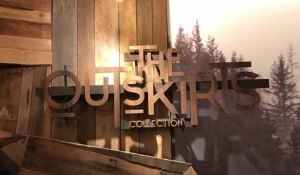 THE STORY BEHIND NEOCON

NeoCon, The National Exposition of Contract Furnishings, debuted in 1969 with 750 exhibitors filling 222,000 square feet of space in The Merchandise Mart. 45 shows later, and more than 1 million square feet of showroom and exhibition space, NeoCon is now considered the largest commercial interiors show of its kind in North America.

Our worlds are colliding. Boundaries between home and office, personal and professional are blurring more than ever. Today’s generation craves it – a subtle yet sophisticated integration of work and play no matter where they are. It’s a spirited shift in culture and style, fusing form with function in ways we’ve not quite seen before. Today, there’s little in our lives that isn’t touched or somehow influenced by the biodiversity and edge effects of our surroundings. It’s part of us – how we live, how we engage, how we work.

As the inspiration for NeoCon 2017, The Outskirts brings this shift into focus as Bentley’s new chapter in the evolution of commercial design. The concept hones in on our zest to connect our environments and our inspirations as we cultivate its look and feel into the carpet styles we create today.

At NeoCon, Bentley debuted The Outskirts Collection as well as revealed a sneak peek into the Bentley Design Studio, where we also featured future products in the early muse stages.

As we watch the continued expansion of the edge effects that exists between work and home, The Outskirts concept reinvented Bentley’s two showrooms at NeoCon, both inside the Merchandise Mart (suite #10-1098) and at our beautiful showroom in the Kinzie Design Center (220 West Kinzie Street).

In The Mart guests skimmed past a rustic cabin setting as they circled toward an elegant, modern tavern. The path along the way was filled with pattern and texture – revealing different ways Bentley’s materials can be combined in our various worlds.

As part of the journey, we inspired clients with Super Dirty Chai Tea served from our Bentley Bar in the morning and our very own Outskirts branded PBR Beer in the afternoon.

The Outskirts, along with Bentley’s other latest products, was showcased at the company’s second showroom, located at the Kinzie Design Center (220 West Kinzie Street).

Both showrooms were transformed to ignite conversation, bring inspiration to the design community and to our brand. It was an integration of life, work and home without compromising on style, comfort or culture. At NeoCon 2017, we invited guests into this new world of diversity, growth, and evolution.

Bentley received 8 awards at NeoCon 2017 in Chicago. We are proud to share the following accomplishments: